​At one time, South Carolina cities and towns could not be sued when an individual was injured. Also, their employees could not be sued for any action taken while performing an official duty. This protection, known as sovereign immunity, ended in 1986, when the General Assembly replaced it with qualified, limited liability by passing the SC Tort Claims Act.

South Carolina residents then gained the ability to bring suit against their state, county or municipality, but only in certain circumstances, and only for limited amounts of money. Currently, an individual suing over a single occurrence of negligence cannot recover damages of more than $300,000. The total damages recovered from the government for any single occurrence can be no more than $600,000. These liability caps remain in place no matter how many claimants are involved.

The Municipal Association has used SC Municipal Insurance and Risk Financing Fund data to estimate the potential impact of increases. The $1 million/$2 million increase, for example, is projected to cause a total of a 9.5 percent premium increase as a result of increased losses and reinsurance.

Many times, claims amounts do not come close to reaching the existing limits. In the last 24 years, only 54 claims against cities and towns have amounted to $250,000 or more, according to data from the SC Municipal Insurance and Risk Financing Fund.

"Given the estimated total number of settlements in that time period," Tigerron Wells, director of governmental affairs for the Municipal Association, said, "this frequency rate works out approximately to two large claims out of 470 settlements occurring each year. In other words, only 0.4 percent of claims handled by the SC Municipal Insurance and Risk Financing Fund are in amounts at or approaching the $300,000-per-individual cap." 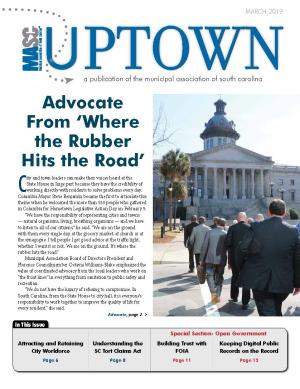