The new year is right around the corner, and with the beginning of 2023 comes a new two-year legislative session.
Legislators will return to Columbia on Tuesday, January 10, 2023, to begin the 125th General Assembly. While some things will remain the same, there will be many changes and new faces expected when lawmakers descend on the capital city to consider a new budget, changes in state law and other decisions that directly affect residents and businesses around the state. After the June primaries and November elections for the House of Representatives, new and seasoned faces alike in the House will bring varying ideas and perspectives to the session.
Senate leadership changes
In the fall of 2021, the Senate saw changes in its leadership ranks after the passing of longtime Senate Finance Chairman Sen. Hugh Leatherman from Florence.
As the next ranking member on the Senate Finance Committee, Sen. Harvey Peeler from Gaffney was elevated to chairman according to Senate rules. Since Peeler was also the sitting Senate president and could not serve in both positions, he resigned as president. The Senate then elected Sen. Thomas Alexander from Walhalla as its president.
Because of these changes, several Senate standing committees received new chairmen and members. Senators serve four-year terms and are not up for reelection until November 2024. At that time all 46 senators must campaign to keep their seats if they choose to return to service in the Senate. They will run in their new districts in 2024 after the 2020 census forced lawmakers to redraw district line maps based on South Carolina’s population.
House of Representatives leadership changes
The House of Representatives saw many changes to its leadership and committees even before the June primary elections.
After deciding not to seek reelection to his House seat, former Speaker Jay Lucas resigned his position as speaker of the House in order to ensure a smooth transition for new leadership. In May, the House elected Rep. Murrell Smith from Sumter as speaker and Rep. Gary Simrill as chairman of the House Ways and Means Committee.
House members serve two-year terms and run for reelection every two years if they choose. In 2022, representatives ran on newly-drawn districts based on the 2020 census population. Thirteen House members chose not to run again for their seats. With two Democrats and 11 Republicans retiring, this paved the way for many new faces at the statehouse in January. The June primary elections saw eight House incumbents  lose their seats to challengers from the same political party. The November general elections took place November 8 and six House incumbents lost elections to opposing party challengers.
House members plan to return to Columbia on December 6 and 7 for their reorganizational session to elect the speaker, speaker pro tempore, reading clerk, clerk and sergeant at arms. During this reorganizational session, all House members are sworn into office and they choose seats in the chamber, the speaker of the house appoints members to committees, and committees elect their chairmen.
After this preliminary session, lawmakers come back in January ready to hit the ground running. The Senate does not have to hold a reorganizational session since its members were not up for reelection this year.
New legislation
With the start of a new two-year session, representatives and senators introduce new legislation. Bills that did not pass at the end of the 2022 session are dead and must be re-introduced as new legislation in order to advance. The bills introduced in 2023 may remain active until the end of the 2024 session.
Lawmakers can introduce a bill anytime during the session and prefiling opens before the session starts. House and Senate members can begin prefiling bills in December.
New issues
Every legislative session is unique to the social and political climate that the state is experiencing at the time. The COVID-19 pandemic, for example, forced the General Assembly to suspend its session in 2020 and only return to take up budgetary matters related to pandemic relief.
The 2022 session focused on many social issues that took up substantial debate time, such as abortion, critical race theory and women’s sports. Every session, legislators must pass a spending plan, or budget, to allocate revenues for state government to operate in the new fiscal year.
Stay connected
City and town officials have several ways to stay connected with the Municipal Association legislative team during the legislative session.
December 2022 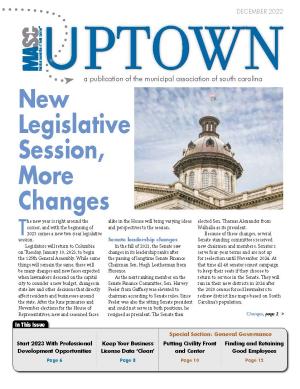